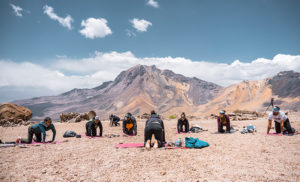 I was recently sponsored to join a small team of Peruvian yogis and athletes to attempt the World’s Highest Altitude Yoga class on top of the Chachani Volcano in Arequipa, Peru and take part in a documentary film about the experience. 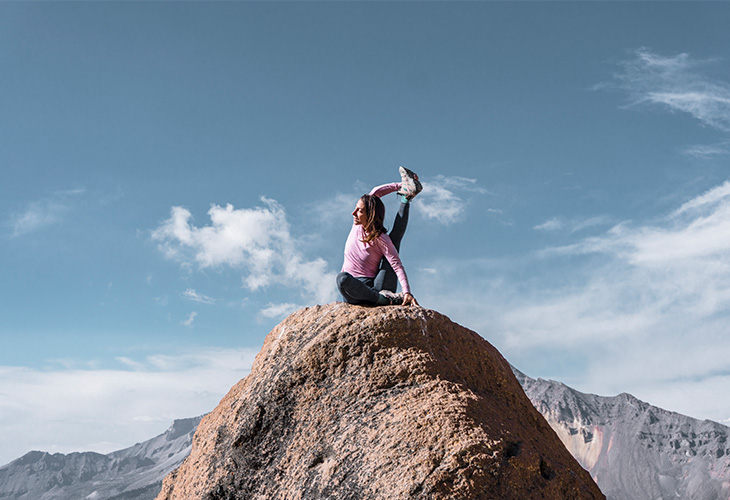 The goal was to bridge hiking and yoga and explore the many elements of our yoga practice that may support a high altitude hike, such as the ability to control the breath, the mental capacity to take one mindful step at a time, and the physical aspect of practicing yoga in high altitude.

The experience of hiking Chachani with a team reminded me that we can only see the Self reflected back in others.

Even though I had little hiking experience, it seemed like an opportunity of a lifetime, so I accepted.

As I began to prepare, questions and fears started to trickle in: What is high altitude? Is it safe? How cold is it at the top? How should I train for this? Why am I doing this?

The yoga practice teaches us to face what surfaces, so I sat with this last question for a week. I realized I disliked being uncomfortable. I hated feeling cold, tired, or hungry and would go to great lengths to avoid these sensations.

I felt an inner call to go to Peru and get uncomfortable to face the discomfort I was avoiding, not only in physical sensations, but emotional too . . .

What is High Altitude?

In high altitude, there is less oxygen molecules in the same volume of air as you inhale, so it decreases the amount of oxygen you receive.

Within the first few hours of exposure to high altitude your breathing rate increases, water loss increases, and your metabolism speeds up.

There are 3 types of medical problems that can occur due to high altitude:

You can control for symptoms of altitude sickness by what’s called acclimatizing, or exposing yourself to high altitude to adjust to the lower level of oxygen. For example, ascending at a slow pace and spending time acclimatizing every 1000m.

If symptoms occur, they are usually alleviated by going back down. While you can do your best to control for altitude sickness, there are no known correlations.

I had two months to train for this expedition. I continued my daily yoga practice and daily pranayama. I added in 4-5 days a week of 1 hour on the stair machine, as well as some strength training.

In the last month of training, I used an oxygen mask while on the stair machine. Oxygen masks decrease the amount of oxygen you receive. I also watched YouTube videos about hiking Chachani, gathered a list of what to pack, and watched a few documentary films on mountaineering and Peru. I wanted to give myself extra time to acclimatize, so I arrived in Arequipa three days before the whole team did. Arequipa’s altitude is 2,328m (7,638ft). Four volcanoes frame the city of Arequipa: The Misti, Ampato, Pichu Pichu, and Chachani.

During the first few days, I familiarized myself with the center square, took some yoga pictures around the city, and got to know the film crew. I experienced little symptoms from the change in altitude aside from a loss of appetite. 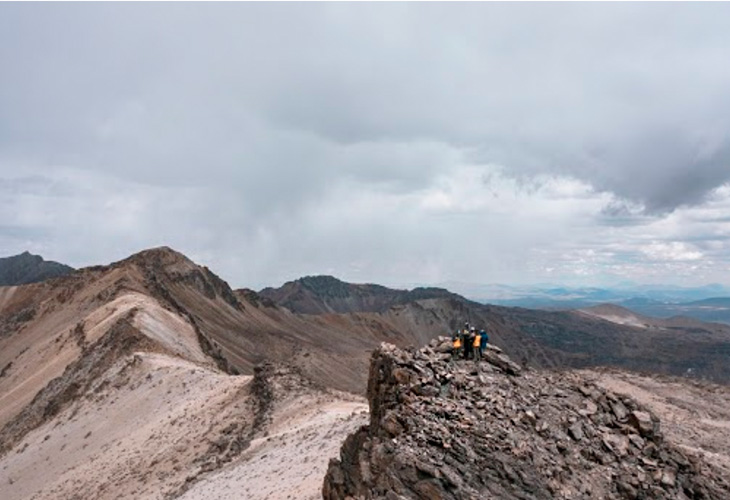 To acclimatize for our Chachani hike and yoga class, we hiked the Huarancante 5426m (17,802ft). About half way up, one team member began to experience altitude sickness. When we got close to the summit it began to snow with strong winds and the terrain became rocky and narrow.

The closer I inched toward the summit, the farther away my team members appeared from me and each other. It became very hard to breathe and I could only breathe in and out through my mouth.

I was breathing in for a single count of one, and out for a count of one. There was a moment when I wondered if I was hyperventilating and if I would make it to the top.

I recalled everything I had read about how to hike in high altitude, which you could summarize as: take one step at a time. So that’s what I did. I took one baby step at a time and focused on my breath until I reached the summit. Once there, the snow turned to hail and the wind was so strong the hail was hitting us from the side.

While I would have normally found a way to avoid this situation like asking one of the guides to go back down with me, I thought experiencing these conditions was exactly why I wanted to come, so instead I sat. I took Sukhasana, or Easy Seated Pose, on an uneven rock and closed my eyes.

I recalled everything I had read about how to hike in high altitude, which you could summarize as: take one step at a time.

My fingers and toes stung from the cold. My nose was running and my eyes watered, my body began to shiver. While I focused on the sensations in my body I asked myself, how bad is this, really?

Was this any different than other uncomfortable situations at sea level? About 40 minutes later the team and crew came back and we made our descent down the mountain.

The next day, we began our mission.

Read on for my experience of hiking in extremely high altitudes, and doing yoga along the way. 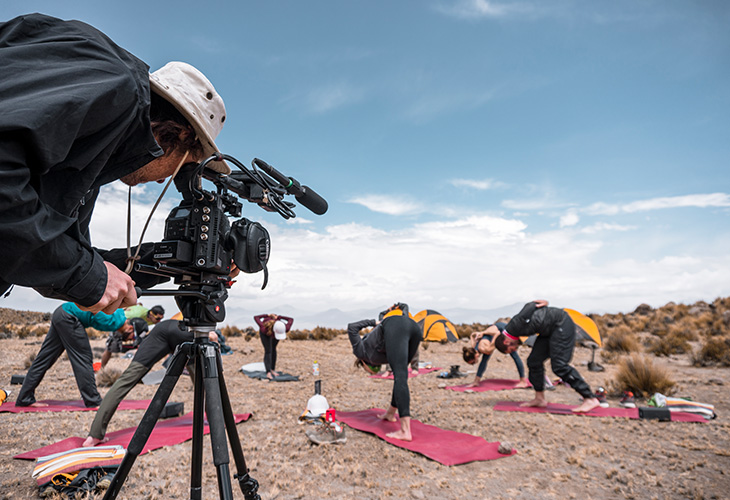 We drove to basecamp at about 4400m (14,435ft). While there were seven yogis/athletes on our hiking team, there was also a film crew of four plus 10 guides and porters.

Base camp was set up and we practiced our first high altitude yoga class. At this altitude, I noticed it was hard to balance and a bit more challenging to breathe.

Love hiking and yoga too? Practice These 10 Yoga Poses for Hikers and Outdoor Enthusiasts

After lunch, we had free time. I organized my stuff in my tent and took an acclimatizing hike up about 1000m. Then I watched an unforgettable sunset and did some nighttime stargazing. 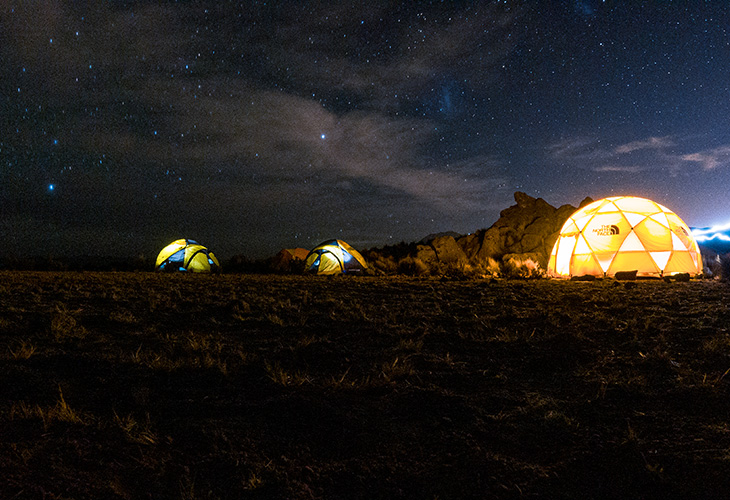 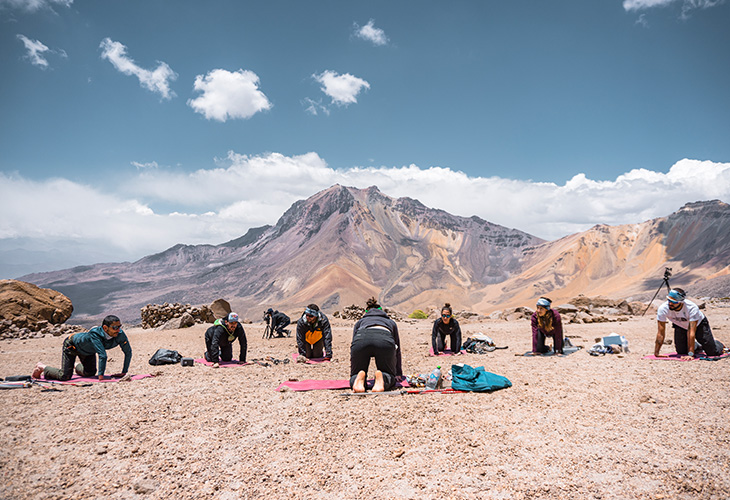 Day two focused on hiking from base camp to hike camp 5,150m (16,896ft). The hike was windy and rocky, but the views were spectacular. When we arrived at high camp we settled in and took another yoga class. We ate dinner and went to bed early to prepare for our morning hike to the summit.

We woke up at 12:30am, ate breakfast and prepared for our summit hike 6,075m (19,931ft). One of our team members elected not to hike. It was dark and cold, and we took only what we needed in our backpacks. This time as we hiked, we kept a tight line figuration.

There was a guide leading the hike at the front and the main guide of the expedition, Julver Eguiluz supported the whole team. As we started our ascent, a team member, Alvaro Mestanza got altitude sickness. He tried to continue hiking, but had to go back down. He made it to 5,150m.

As our team went from 7 to 3, a shift occurred in the silence. I felt a newfound motivation to reach summit that had nothing to do anymore with my personal goals.

Then, Dania Habib, who had organized the expedition and was 15 weeks pregnant turned around with her husband, JJ Ciccia, a triathlon athlete, and began to descend. That left only 3 of us on the team. We all stopped and watched as Dania and JJ got smaller and smaller. No one said anything.

As our team went from 7 to 3, a shift occurred in the silence. I felt a newfound motivation to reach summit that had nothing to do anymore with my personal goals. We were now climbing for Dania and for the group to achieve the world’s highest altitude yoga class.

We continued on, one breath and one step at a time. It was freezing cold and I began to feel dizzy. Luckily, the higher we ascended the more we took breaks. As light began to appear on the horizon, it invigorated the team to continue on.

Then we saw the summit and finished our final ascent. It’s difficult to put into words the feeling of reaching the summit. I was overcome with emotion and gratitude.

After making sure Dania was safe at camp, JJ ran back up in just over an hour and a half so that he could be a part of the yoga class and support his growing family. 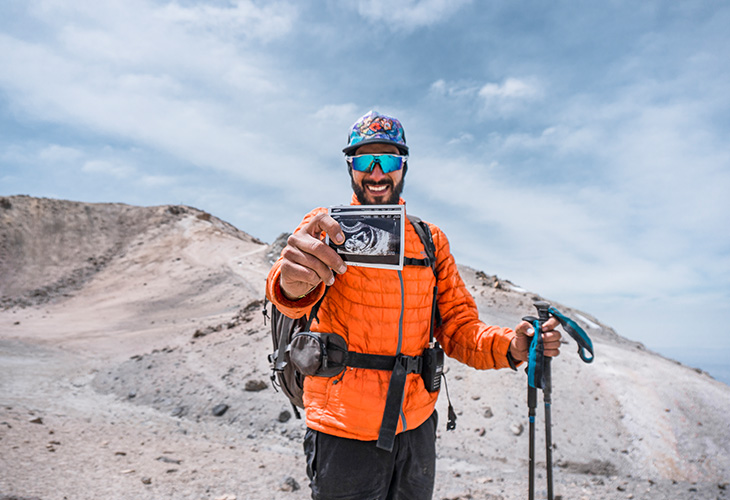 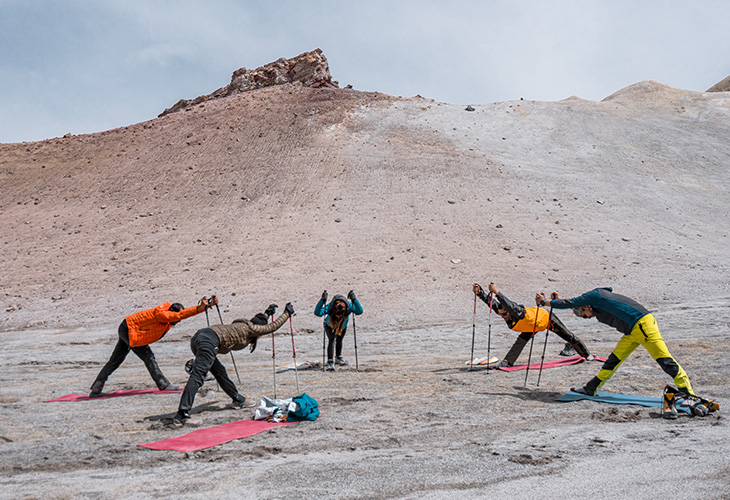 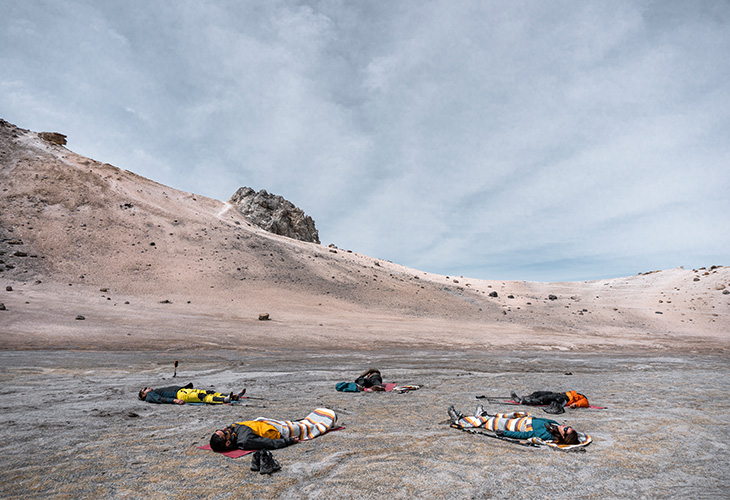 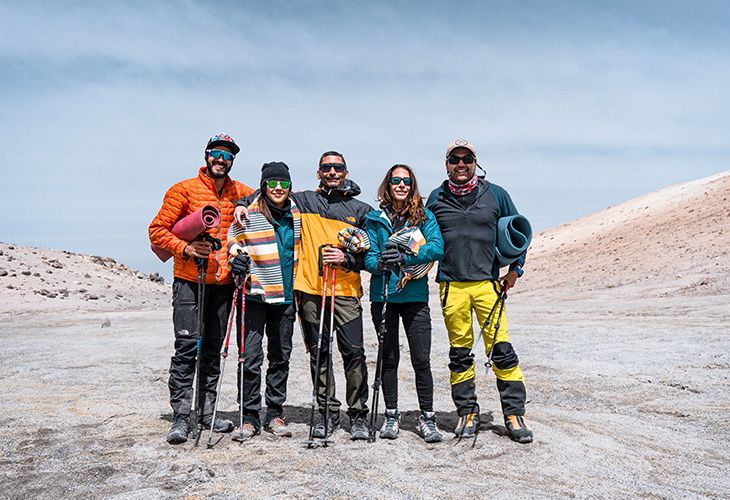 We Completed the World’s Highest Altitude Yoga Class Ever On the Top of the Chachani Volcano!!

I achieved my personal goal for going to Peru, which was to find ease with discomfort. Yet, it took a backseat to the higher purpose of the hike.

Our yoga practice can often feel solitary, an inward journey to the Self. The experience of hiking Chachani with a team reminded me that we can only see the Self reflected back in others.

I walked away from the experience feeling that the group collective is powerful and raises the experience of Self. And that while you might have your own personal reasons for doing things, when we let go of the ego, more meaningful reasons emerge.

The post A Yogi’s Experience Taking the World’s Highest Altitude Yoga Class On Top of the Chachani Volcano appeared first on YogiApproved™.

Why Adriene is My COVID-19 Buddy—and Everyone Else’s

Why Adriene is My COVID-19 Buddy—and Everyone Else’s

This site uses Akismet to reduce spam. Learn how your comment data is processed.

7 Ways to Use Ayurveda for Better Digestion

7 Ways to Use Ayurveda for Better Digestion

Balance Your Moods by Understanding the Doshas